Islands Medical Assistance Society (IMAS) began as an effort to help the people of the Cres-Losinj archipelago in Croatia. Immigrants from the islands of Cres, Losinj, Ilovik, Susak, Unije, Male and Vele Srakane from the tri-state area of New York, New Jersey and Connecticut gathered in reaction to alarming news articles regarding deteriorating conditions of the main hospital in Mali Losinj, the “ Dr. Dinko Kozulic Dom Zdravlja”. The difficult plight of dialysis patients was particularly alarming to many. Local advocate Mr. Zivko Zuber spoke of how he, a dialysis patient, and others traveled for hours to the main land over a calm or stormy Adriatic Sea many times a week for treatment. From the start we decided to support the dialysis patients with our words and actions.

Our main function as an organization is to host fundraising events to support our mission statement; a not-for-profit humanitarian foundation founded in the USA to help support health services for the people on the islands of Cres, Losinj, Ilovik, Susak, Male & Vele Srakane, and Unije in Croatia. Our goal is to improve the medical service experience of the islanders in their communities.

Our first president, the late Mr. Mario Dumicic+* ( president from 2002-2006 ) embarked on an ambitious Goal to raise funds for an X-Ray System the Bucky Diagnostic CS2 by Philips, valued at $83,000. Thanks to our Board and the support of all the societies 437 guests attended the next major fundraiser, our “First Annual Dinner Dance” at La Fortuna in Fairview, New Jersey, on February 2, 2003. In less than two years the Golf Outing, Dinner Dance and the Direct Appeal collections enabled us to donate and 3-23-21 L install the x-ray machine to the renovated rooms in the main hospital in Mali Losinj, at a Grand Opening ceremony on July 15, 2003.

On February 11, 2005 IMAS was approved by the IRS in the State of New York as a tax-exempt organization under the 501(c)3 status. It enables our donors in the USA to make tax exempt donations.

The annual Direct Appeal continues and is mailed out along with our Newsletter sharing stories of the islands, our activities and collects direct donations from friends and family year round. Look for the link of the current copy on this website. There are many friends who have never been to our islands and have generously made donations throughout our almost 20 years in existence.

In our goal to include support for all the hamlets we have donated equipment for several “Ambulante”, out patient clinics in Cres, Ilovik, Susak, Unije, Cunski, Nerezine, Martinscica and Belej. We have also made donations to the “Ljeciliste” Wellness Center in Veli Losinj and Senior care facilities in Cres, Veli Losinj, Mali Losinj, and Susak “Angelike Casne Sestre,” as well as the Susak Volunteer Fire Department.

Our Board of Directors have, and continue to meet with hospital officials on the islands as well as county officials in Rijeka to better understand the needs of their medical facilities. From the start the late Director Dr. Vjekoslav Devcic, the then main hospital Director of “Dom Zdravjla” in Mali Losinj; the Honorable Dragan Balija, mayor of Mali Losinj; the Honorable Gaetano Negovetic, mayor of Cres and County Executive Mr. Zlatko Komadina, as well as his County Vice Executive Mrs. Marina Medaric have guided us and are grateful for our support in our donations efforts.

In recognition of their past efforts we wish to name those who have retired from our Board of Directors like Mrs. Pierina Ames, Ms. Sanja Kraljevic, Ms. Natalie Vlakancich, Mr. Dino and Mrs. Karen Mirkovic. The current Board of Directors have grown to include Mrs. Loredana Beg, Mrs. Marina Pilic, Mrs. Fedora Rucconich, Mrs. Astrid Kuljanic, Mr. Franko Neretic, as well as the next generation of Croatian-Americans Mr. Justin Calabrese, Ms. Doris Karcich, and Mrs. Julie Butkovic.

The Board of Directors are committed, willing, and prepared to continue the mission of IMAS as they share the same love for these islands. The future of IMAS is in their hands and yours. 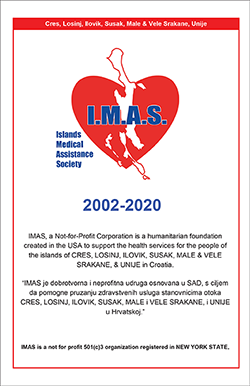 To Donate Or For More Information: